Uncertainty (and the things we do to manage it) 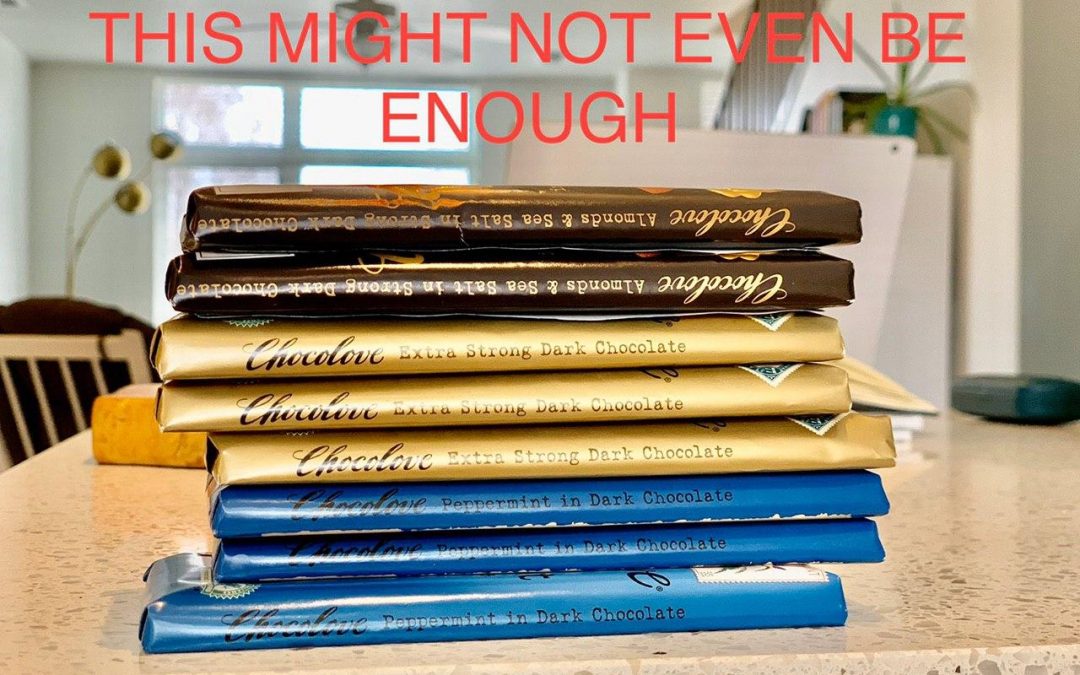 For the last week, I’ve been swinging back and forth between feeling calm and feeling anxious, as if I’m holding my breath and waiting for something to happen. It’s made all the weirder by the fact that we’re all waiting for a tiny, invisible enemy that is having an outsized impact on the world.

On Friday, we went to Costco to stock up on food and other things. We thought we would beat the rush if we got there close to when it opened. In hindsight, that was silly. People were lined up at 10 and rushed into the store to get… toilet paper. We got there at 10:30 and it was all gone. When we saw the full parking lot, Ryan thought that all of the food would be gone, too. But we had nothing to worry about, because as we watched the endless stream of shoppers exit the store, we saw people with carts loaded with toilet paper, Mountain Dew, piles of salami and bologna, chips, Gatorade, Coke, carts full of wine. At that time, there was no shortage of veggies, fruits, canned goods, frozen stuff, beans and rice. Loads of toilet paper were streaming out of the store, but very little nourishing food.

While it’s nice to know that people aren’t fighting one another over things, it’s still hard managing my own emotions. We’ve all had our own experiences throughout the week. Each time Ryan expressed frustration or any other emotion, I would repeat “WE’RE GONNA BE FINE.” I thought I was being soothing, but at some point I really stopped and heard myself — it was coming out more like a growl. I was really trying to control their emotions so I didn’t have to feel my own rising fear.

In the last few weeks, I’ve watched the people in my newsfeed go from scorn and disbelief that COVID-19 is a thing to worry about, to all out hysteria and panic. I’ve watched others rise into leadership, some of them from a place of wanting to help and some from a place of wanting to profit. Each view, no matter where it fell on the spectrum, expressed utter *certainty* that things would turn out the way the person expressing them believed they would.

A friend said to me once that those who have little information and expertise like to deal in certainties and extremes, using words like “always, will, never.” On the other hand, those who know the most about a given topic and have a level of expertise in the subject tend to speak in a way that acknowledges the uncertainty in any event, using words like “generally, if, but, yet, possibly, likely, unlikely.” Those who are more tentative about what they know seem to give a nod of deference to that we can’t possibly predict anything with accuracy, given the number of variables.

And that’s the scary part, isn’t it? It’s the waiting, the not knowing, the acknowledgement of the total uncertainty of the whole thing. It’s the wild number of variables that no single human can track. It makes us all so anxious that we go out and buy loads of toilet paper (because it’s made all the more attractive by virtue of the fact that everyone else wants it, too) instead of the things that will actually sustain us. (As for me, I’m not hording toilet paper. I’m hording chocolate).

I recently read a fantastic article by Vaughn Tan that described the difference between managing risk and managing uncertainty. Managing risk only works when the variables and the possible outcomes are clear. When you know what roadblocks are ahead and how they might affect an outcome, you can work to mitigate those issues and reduce the risk. But in the case of uncertainty, the outcomes are completely unclear.

This is a case of unprecedented uncertainty, made all the more intense by our hyper-connected world. Given the ease of travel and the number of people who do it on a daily basis, given the dependence we all have on one another to keep our economies running, given all of the factors that come into play, there is no one who isn’t isn’t affected when the global dynamics change. (We all need each other! Doesn’t that make you want to sing Kumbaya?). And, while we can somewhat predict or foresee some of what might happen within one system when it changes, we can’t predict what happens within all of these systems when they are all interconnected. The level of complexity is exponential and it becomes more and more difficult to mitigate any risk, or control for uncertainty.

COVID-19 could completely fizzle out like SARS did. Or, it could wreak havoc on our medical infrastructure and our global supply chains, lead to a contraction in the world economy, lead to possibly long-term recessions in countries around the world. It could fall somewhere (anywhere!) in the middle. Because of the complexity of our world economy, we really don’t know what the fallout might be, so it’s difficult to take mitigation measures and expect them to reduce the inherent uncertainty.

Which is maybe why despite all of the preparations, all of the food we have, all of the deep-breathing, all of the checking in I’m doing with friends and family, I still don’t feel the sense of solid groundedness that I crave right now.

I think our minds crave answers. We crave some kind of certainty that makes us feel as though we have a grasp on what’s about to happen, that we’re safe. There are so many ways to look at this; you could see it as an amazing time to be alive, or a terrifying one (or maybe both at the same time). It makes me think of a video of Buddhist teacher Pema Chodron, who said that the feeling of safety and certainty are illusions, maybe even the only illusions under which we operate. Whatever we’re facing today, another threat will emerge tomorrow, and it will be just as scary and bewildering as the last. According to Pema, the only way to overcome this is to accept that there *is no solid ground.* There never was, and never will be.

She says we need to “dip our toes” into the idea that we are groundless. I think we’re past dipping toes. We’re all getting into the deep end, whether we get pushed in or make the choice to jump.

I don’t have an answer to this problem right now, and I’m definitely writing this as much for myself as for anyone else. But I do want to say that it’s okay to feel ungrounded and uncertain. You don’t have to have the answers — no one in the world does. I think the best we can do right now is to find peace within ourselves in every moment, as challenging as that may be.