If you’ve ever picked up a copy of Domino magazine, you know that they have an eye for two things: design, and finding obscure and absurdly expensive items. 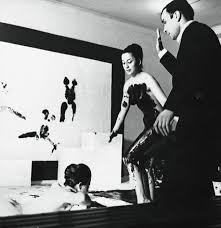 The other day I was flipping through an old issue and came across a striking blue book titled Yves Klein: With the Void, Full Powers. The book describes the work and life of Yves Klein, the French abstract artist who created art between 1948 and 1962, before he died of a heart attack at the young age of 34.

Take a minute to google him, and then check out the images associated with him. Among the photos of nude female models covered in paint, you’ll notice something: Klein’s work is associated with a particular color of blue.

Klein was fascinated with monochromes; that is, visuals executed in black or white, or in various shades of only one color. He was so entranced with a particular shade of ultramarine blue that he worked with a chemical technician to perfect it in 1956, and then named it International Klein Blue (IKB).

Why blue? According to Artstory.com:

Klein’s major artistic breakthrough occurred in 1947 while lying on a beach with [friends] Pascal and Arman. In the apocryphal account, the three friends divided the universe between themselves: Arman claimed the materiality of the earth, Pascal appropriated language and words, and Klein possessed “the void,” or the planet empty of all matter. Klein embarked on a “realistic-imaginative” daydream into the depths of the universe, where he claimed to have inscribed his name in the sky. The symbolic gesture was a flashpoint in Klein’s artistic pursuit to grapple with what he defined as the infinite.

Klein wrote that he “began to feel hatred for birds which flew back and forth across my blue sky, cloudless sky, because they tried to bore holes in my greatest and most beautiful work.” For the rest of his life, Klein would devote himself to depicting that mystical experience through his art.

Taking in stride what seems like an obvious allusion to the use of psychedelics, this was the starting point of Klein’s short lived career. With the creation of his signature color, Klein’s Blue Period was off to a start. He created monochromatic paintings using only his signature color IKB to varying degrees of success.

As is often the case, Klein was not known as a groundbreaking artist in his time. He traveled in the same circles as the major modern artists of his time, he went to the same places, but it wasn’t until a couple of decades after his death that he became famous. And what he became famous for was the singular study and use of one color.

When we think about groundbreaking painters, we think of those who know how to use a plethora of colors and how to bend light and darkness to illuminate the subject. How can you paint with just one color? Is that even possible? Yes, it is, and Klein’s signature color is still used by painters and designers all over the world, decades after his death. He’s become timeless. He staked a claim by going deep on one color.

In the same way, it’s okay for you to winnow down what you want to say and focus only on one major premise for your book. In fact, it’s not only okay but very necessary. First-time authors typically come to the table with way too many things to say, way too many stories, and way too many ideas. They fear that focusing on just one thesis will pigeonhole them. The truth is that yes, it will pigeonhole you a bit, but only for the time being (and you can use this to your advantage). When you’re ready to evolve, the members of your audience who are ready to evolve with you will come along for the ride.