What Kind of Writer Are You? And Why This Matters 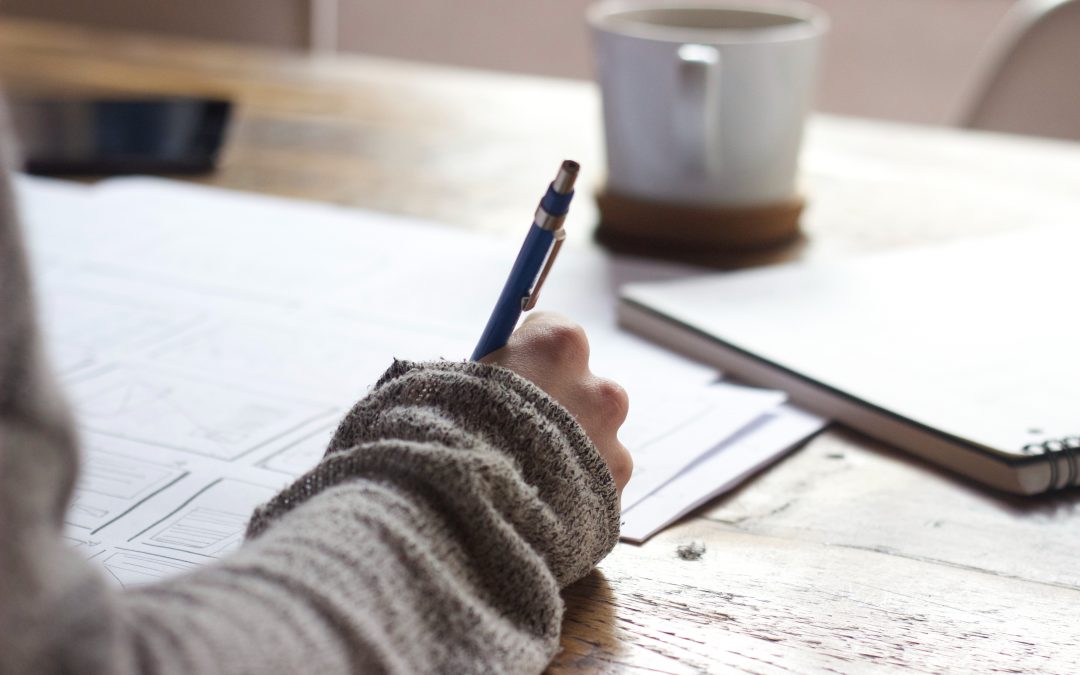 I’ve worked with dozens of writers who are stuck in their writing process and they don’t know why. They might say:

I can’t outline my book. I know what it’s about, but when I try to write an outline, nothing comes. It doesn’t make sense to me, but I know I should have one.

I know I need to keep writing, but I can’t move on from this one section. It just needs to be perfect.

What I’ve written is exactly what I meant to say, but there’s no life in it and I think it needs to be more creative.

I have all these stories, thousands of words written, but I have no idea how to organize them at all.

People typically don’t know why it’s so confusing when it comes to writing and organizing your thoughts into a book or an article. The problem is that we’ve been taught a cookie cutter way of thinking about how to write, which goes something like: Have idea. Create outline. Write. Edit. Publish. The truth is that it’s anything but simple, and part of this has to do with the differences in how we write and create.

One of my favorite descriptions of writers comes from Kurt Vonnegut, who once said there are two types of writers: swoopers and bashers. According to Vonnegut:

Swoopers write a story quickly, higgledy-piggledy, crinkum-crankum, any which way. Then they go over it again painstakingly, fixing everything that is just plain awful or doesn’t work. Bashers go one sentence at a time, getting it exactly right before they go on to the next one. When they’re done they’re done.

Swoopers are those who have the big idea and have to get it all down on paper in a rush of blood and sweat and tears. They don’t stop until they have everything they want to say down on paper. Then they go back and refine.

The bashers meticulously labor over every sentence, every paragraph, until they feel it is as perfect as it can be. They enjoy choosing the perfect word to describe what they want to say. Needless to say, their refinement process might be a bit easier in the end, but it takes longer to get that initial draft on paper.

If you think about it, you can see swoopers and bashers in all areas of life.

Most of the entrepreneurs I know are swoopers. They’re the idea people, the creators with the big vision, but they’re not always the ones to get it all organized and expressed in vivid detail and precise language.

Most of the bashers I know are language lovers and have a deep knowledge of words and what they mean. The wrong word drives them crazy, so they will labor over a sentence for what would seem like insane amounts of time to a swooper.

I think Vonnegut is right and I’ve seen this with my clients again and again. But I would add one more layer to his idea: analytical writers and intuitive writers. The image below displays how these four traits work together. 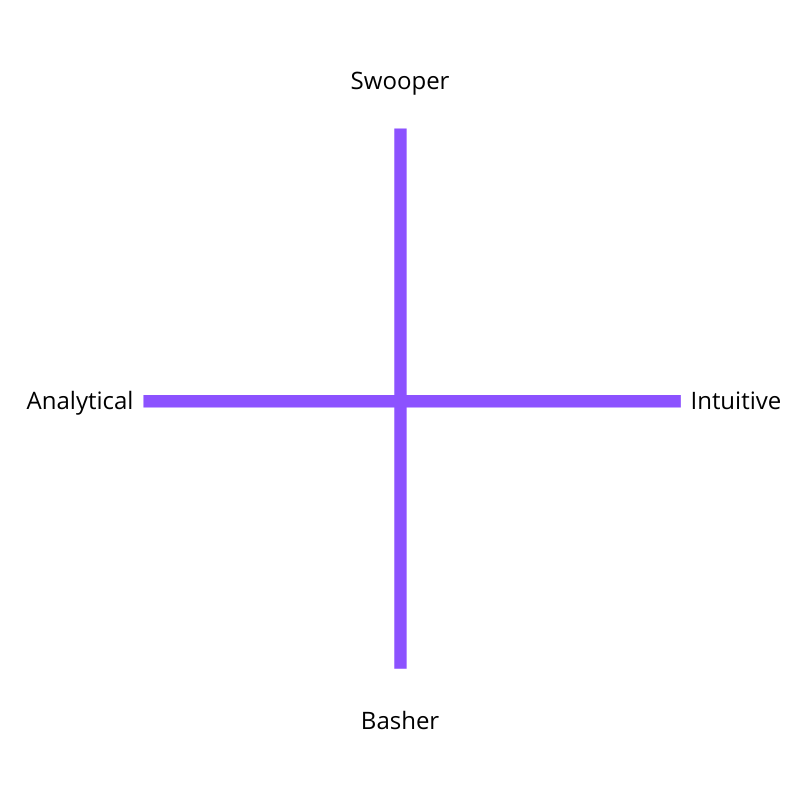 The Intuitive/Analytical line describes how you think about writing, how you organize and plan your writing. The Swooper/Basher line is about how you actually write.

Analytical writers tend to rely on linear thinking. This does not mean that they are only linear thinkers and cannot think creatively, it just means they tend to lean that way. They typically know exactly what they want to say when they sit down to write. A very analytical writer will have a relatively easy time creating an outline of their book, and it might even be extremely detailed. The outline usually works really well for an analytical writer, and they move quickly because they know exactly what to write next and what they’ll be saying. But when they get done, they often lament the lack of feeling or emotion in their work, and then seem short on ideas for how to make it stand out from the crowd.

Intuitive writers know generally the topic, but they have no idea what will come out when they write. They are similarly capable of being analytical, but in their creative process they lean toward and rely on their intuition. What comes out as they write is as much a surprise to themselves as it is to anyone else. Outlining a book or any other piece of writing will drive an intuitive writer nuts and make them feel as if they’re stifled. In fact, an outline is almost a waste of time because they probably won’t follow it anyway. They need to feel their way through the process.

Let’s say you’re an analytical basher. This means you know exactly what you want to say, you like to plan it out meticulously, and while you write you like to focus on the selection of every word. You like to make sure each section is perfect before you move on. In fact, you might even be slowed down by your need to perfect every thought.

If you’re an analytical swooper, you know what you want to say but your outline probably won’t be as in-depth. You’d rather have a loose outline that tells you where to start, and then you like to sit down and let it all come out in one rush of work. Going back to review your work is not your favorite part of the process, however; you might be quick to move on even if it needs more work.

If you’re an intuitive basher, your story mechanics and word choice will probably be on par, you’ll need to spend more time reorganizing your work when you’re finished writing. If you’re an intuitive swooper – well my god, good luck to you. Kidding! I happen to speak from experience when I say this can be a challenge. In my work with clients, I am an analytical swooper. In my own creative work, I’m an intuitive swooper. This is where some of my most creative work comes from, but intuitive swoopers tend to have the hardest time making any sense of their work when it’s finished. Not in the sense that “the words don’t make sense,” but I might have a dozen stories and essays that read well on the page but have no cohesive red thread running through them. While the intuitive basher will have more polished prose, the intuitive swooper tends to have both mismatched themes between stories or pieces and the need to go back and revise their work.

In both cases, intuitive writers might be better off focusing on the theme of the piece or story they’re writing in each part of your book rather than planning and outlining. By focusing on the general topic of the book, and then the general theme of each chapter, you’ll be giving yourself enough room to explore and move without feeling constricted. An analytical outline might be 15 pages long (or many more) with detailed bullet points and subheadings. An intuitive outline might be one or two pages, with the general topic at the top of the page, themes for each chapter, and maybe one or two jotted stories or ideas about each theme.

If you’re a swooper, sit down and write your entire piece and get it all out, as messy as it might be. Hold a place for facts by using brackets like this: [NEED TO INSERT STATS ON CRYPTOCURRENCY AND CATS]. Weird example, I know. Make sure to highlight any sections that need work or refinement. Do what you can to minimize interruptions to your flow.

If you’re a basher, enjoy your process. Take your time over your words and phrases, but don’t get stuck if you feel it isn’t perfect – perfection is a daunting standard that will never be met. If you get stuck on a word or a phrase, read it out loud to yourself. Hearing the words spoken can give you the necessary clarity to move forward or make changes where needed.

The point here is to honor the kind of writer you are instead of forcing yourself into being creative in a way that doesn’t jive with you. Think about how you might get closer to that sweet spot right in the middle, the place that combines a healthy amount of all four traits.